Chihuahua Territorial Marking is a natural behavior,  every dog marks its territory, it’s a primal instinct. They tend to pee at anything to do so.

So when a chihuahua begins marking within the house, it can be frustrating for an owner. The house starts smelling like dog urine. Stains of pee seem to be everywhere.

If you want your chihuahua to stop urinating in the house, it’s important to know the difference between whether the dog is marking or accidentally peeing. Because full-on urination will be clear as you can notice a puddle where the dog has finished peeing. However, Marking is just a squirt usually near something vertical

There is a rule you have to take seriously before you take any further action: if your dog had received correct potty training and recently he is emptying his bladder in the house, he might be ill and you need to take him to the vet. 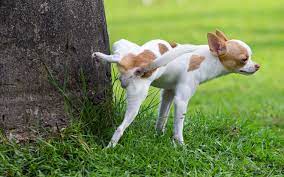 When marking, a typical dog won’t empty their whole bladder but will spray some urine. They move from place to place and spray out a little amount of urine wherever they go.

Whenever chihuahuas seem to mark, it is because of issues related to behaviors.  They want to declare the territory. So they usually know the rules if you have taught them beforehand.

Marking doesn’t include bowel movements since it’s done outside. You know there is a potty training problem when your chihuahua both pees and poos inside the house. 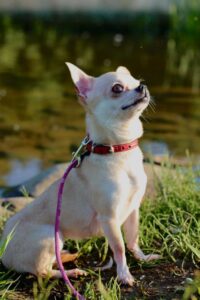 It’s usually males who are the ones with alpha characters. Since marking seems like an alpha-male thing to do you might think only male chihuahuas are liable to mark the territory but both genders mark. However, males often mark more than their gender counterparts.

Nearly all senior chihuahuas don’t have marking issues as they are very well settled in a household.

It is possible that marking is limited to an area or through the household. Blocking the area won’t do anything because they will find a new place. Some of the well-known places are near doorways or certain objects.

Most of the time, marked spots are vertical in nature such as standing lamps, sides of sofas and chairs, and table legs. If there is a puddle left on the floor, it doesn’t count as a marking.

If you want to fix the marking issues, it is important to know the reasons for them. They do it for several reasons.

Don’t mistake chihuahuas for their size, they are very energetic and have got animal instincts too. In the dog’s world, there is a pack that always has a leader and the rest of the pack are betas.

If you think that your chihuahua has developed an awful marking habit, it’s because he thinks he is the alpha male or at least competing for it.

There is a common misunderstanding about chihuahuas peeing on the owner’s bed or items. Many people think that their dogs are mean or even funny. However, that’s not the case because your little chi might be acting on leader instincts. Basically, it thinks it is protecting you from outside threats.

Response to other dogs or animals 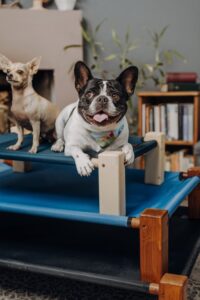 Chihuahuas may mark territory in response to other dogs in the household or the dogs in the neighborhood. Some Dogs even mark in response to wildlife if your house is located near the woods. Animals may include squirrels, deer, possums, wild hares, etc.

Any breed of dog mark due to stress and because a lot of them are prone to the stress-induced environment it’s common they will.

Their stress level may arise due to reasons such as moving, additional family members or pets, losing a family member, and a chaotic atmosphere.

When female chihuahuas are in reproduction urgency, they mark areas so that male chihuahuas can locate them. Obviously female Dogs mark when searching for a partner.

When chihuahuas mark inside the house, the above reasons are obvious but there might be additional reasons. They may have some health issues such as

These problems cause their bladder to be weak.

How to stop Chihuahua Territorial Marking

Marking problems can be annoying. So if you think you need to address the marking issues forever it might as well take your time and effort.

You can limit the marking by cleaning the marked areas effectively. It will be a difficult job as some dogs have incredible smell sense receptors. If you leave it like that your canine might think it’s the toilet area. Use high-end enzyme cleanser products to wash the spots. There are many out there in the market.