As you can read in our article there is the long-haired chihuahua that is Now very popular in the world as the short hair chihuahua which is most widely known, They both have the same body structure and appearance aside from the coat.

In this section, we will cover

The Chihuahua dog was discovered in the mid-19th century in what we call now Mexico.  Breeders think that this breed is a descendant of the Techichi Dog. However, these later resemble chihuahuas in shape but they are much larger in size.

Experts don’t know exactly their situation in Toltec society. But when the Aztecs invaded the Toltecs, the chihuahua turned out to be very popular. During that period there were a lot of myths about chihuahuas, people believe chihuahuas can heal a lot of health issues, also they can foresee the future. In addition, they believed that chihuahuas can guide the owner’s spirit afterlife, for this reason, people used to cremate them alongside their owners. In fact, when the Spanish conquered the Aztecs, the number of this breed decreased and they lost their popularity.

Americans adopted this new breed. Midget was the name of the first ‘official’ chihuahua registered by the American Kennel Club(AKC° in 1904, he has been a big trend.

The AKC today ranks them as the 33 rd most popular dogs in America. The club describes them as fascinating, agile, and sassy. Nowadays, this breed has a high place in American society, especially among celebrities. 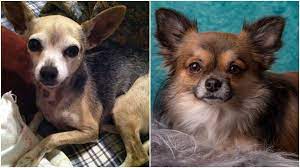 Regardless of their head shape, chihuahuas in general are stubborn, intelligent, and confident. However, They don’t get along with all types of people.

These dogs are lively creatures, they love life even when they get older they show no sign of slowing down. Also, they love to play and they have a big sense of loyalty toward their families. Because they are very good companions, which makes them very sociable, they may not resist the suffering of separation anxiety.

Due to their little size, chihuahuas bark a lot if they were not trained properly. Also, they must be socialized, if not they may become over-protectiveness by their owners.

Chihuahuas both apple and deer head can’t hide their feeling about someone or something. If they don’t like someone or something they will show it to you. They are protective dogs even with their small size they don’t show any fear when they feel that their owner is in danger. For this reason, we can say that they are guard dogs.

Even if chihuahuas have been there living among humans for a long time they still have a prey drive. In other words, when they see a creature smaller than them they chase it. They are both faster, however, thanks to their longer legs deer head are more athletic. Which means that they are faster than apple head.

Some breeders prefer to mix chihuahuas with other breeds, Due to their spunky personalities. For instance, we have The Dachshund chihuahua mix, the Chug Dog mix, and the Pomchi. 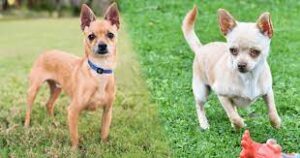 Chihuahuas in general and regardless of their head’s shape are both what we call medium-energy dogs. This means that they require about 30 minutes of daily exercise. Always, THE OWNER MUST AVOID INTENSE EXERCISES, walking will help. If you are in need of harnessing your little dog make sure to buy a chihuahua-sized harness.

The apple head is known to suffer more with his breathing, therefore the owner has to pay attention to the exercises when during summer days. It’s recommended to take them for a walk early in the morning and later at night when it is cooler.

YOU CAN ALSO READ: Behavior and Temperament of chihuahua

What makes different an apple head and a deer head chihuahua is : 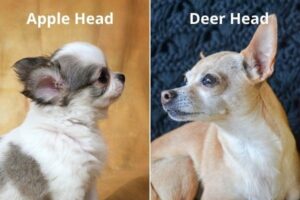 Thus, a deer head chihuahua will look like a small baby doe.

Over the years, Breeders have been producing different chihuahuas with different shapes of the head. As the shape of the head become more and more apparent, the breed was unofficially categorized with one of the two head shapes.

The difference between an apple head and a deer head is based on the chihuahua’s dome, muzzle, and overall head shape.

You may believe that the two type fits the standard, but this is not so.

When you introduce your chi to an organization such as AKS, CKC, or FCI in a conformation event, To see if your chihuahua fits the standard, an issue would come into play because in this event where the dog is judged on how closely he looks like the ideal standard in regard to appearance.

Are there differences in Nutrition between Deer heads and apple heads? 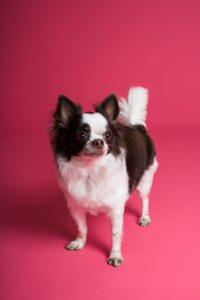 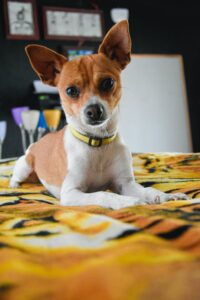 The amount of nutrition that a chihuahua dog needs depends on a lot of factors. However, The size and the level of activity are the two main factors. In addition, If the chihuahuas are a lapdog, therefore he will need a little food, and if they are playing outside and chasing other animals all the time, then they will need more food. In fact, both varieties have the same needs.

Regardless of their small size chihuahuas must follow a good diet to keep them healthy, so the owners must feed them the best nutrients.

Is the deer or the apple shape which one fits the standard?

Associations like AKC around the world don’t make difference between apple head or deer head chihuahuas. Their standard is  “A well rounded ‘apple dome’ skull, with or without molera.”. They don’t accept any other variations.

You can register your chihuahua with the AKC even if your chihuahua doesn’t meet the AKC’s standards. But, the dog won’t win any ribbons for showmanship at conformation shows, such as the National Dog Show, the Westminster Kennel Club Dog Show, or the AKC/Eukanuba National Championship.

There are strict rules that the judges follow when they judge a certain breed. Firstly they use the AKC’s standards, and if the breed doesn’t meet the standard created by AKC. Then the judges will automatically disqualify the dog from winning the title. Secondly, If the dog is spayed or neutered, the judges will not allow him to compete in conformation shows, even if the dog is perfect and answers their standards. Thirdly, chihuahuas weighted over 6 pounds are also disqualified.

After all, deer head chihuahuas are chihuahuas, But it’s almost impossible for them to win any titles at conformation shows.

How do Dog organizations describe The head/face/skull standards?

AKC believes that chihuahua should have:

a well-rounded head” apple dome” skull, with or without molera.A moderately short muzzle. Cheeks and jaws lean. A well-defined stop.

The UK has the same idea as the others

The FCI defines the face and skull shape in this way:

Concerning the skull it must be a well-rounded apple head, the stop must be well marked, deep, and broad as the forehead is rounded above the set-on of the muzzle.

Do keep in mind that each chihuahua is individual, thus you may find a chihuahua somewhere that falls in the middle between two types.

Mixtures of both Types

Some chihuahuas have a medium to long muzzle which looks like deer type that is combined with the round apple shape described by the AKS guidelines.

Also, there are some chihuahua dogs that are a mixture of the two types.

Some breeders believe that all dog breeds over the years have been tweaked and over time their coloring, size, and features are not the same. While the others have another idea that says that producing chihuahuas that don’t fit the AKC standard is not for the betterment of the breed and should not be done.

Over the centuries the change is so big and great that after a certain point if a special look is widespread and consistent, it has broken off into its own variety. And in some special cases, it has even branched out to become its own separate breed.

with a chihuahua, we can’t see this happening any time soon. As we know this breed has already two varieties long and short coats.

When head shape plays a role?

The deer head is the most popular as we have said already and makes fantastic pets. There are two cases in which the matter of apple VS deer head truly matters:

1. In a conformation show event. The apple head is the one that meets the strict guidelines of the breed standard. So the judges will favor the apple.

2. In order to increase desired physical traits and decrease faults. A breeder may choose to produce puppies that meet the AKC conformation standards.

You should notice that any behavioral difference between the apple and deer head has nothing to do with the shape of their heads. Because each dog has its own personality, and his behaviors are related to many factors such as environment, training,..etc.

There are a lot of debates about whether AKC must consider Deer head chihuahua as a variation of The Breed or No. However, there were so many times when the AKC organization has done so.

Can I have a chihuahua with characteristics of Both unofficial varieties? 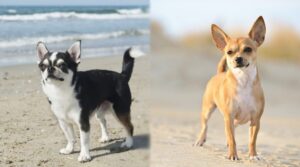 The answer is ‘yes, sometimes chihuahuas are born with traits of both apple head and deer head chihuahuas, or can develop those features later while they grow up. For instance, a chihuahua that has a sloped muzzle of a deer head may form the cobby body of an apple head. Or a chihuahua with an ideal apple head can have a longer muzzle and larger ears of a deer variety.

Moreover, You can never expect the variety of a chihuahua puppy. For example, if you mix two apple-head chihuahuas don’t assume that you will have a litter of all apple heads, the same happens thing when you mix two deer-head chihuahuas. In other words, breeding the same variety means that there is a probability that one or more puppies will be the opposite.

The normal price of chihuahua puppies and regardless of the shape of their heads is between $300 and $500 from a well-known breeder. However, The price of a chihuahua puppy from a championship lineage is a little high, starting at around $1,500. And because deer head can’t compete in a show conformation the high price concerns only the apple head.

The shape of the skull of the apple head chihuahua puppy makes the birth extra difficult, which means that they are often delivered via cesarean birth. For this reason, the price may become a little high.

Before buying a puppy you have to put in mind that you should mention the head shape you want to the breeder. If only the shape is important to you. The chihuahua Club of America CCA has a list of the breeders in all states. In fact, these breeders share CCA s code of ethics, they promised to follow strict processes to guarantee good breeding practices.

Both unofficial varieties are good pets with a lot of great characteristics. So if you are not willing to compete in a conformation show don’t worry about the shape of your chihuahua’s head.

Brindle chihuahuas-Everything You Need To Know