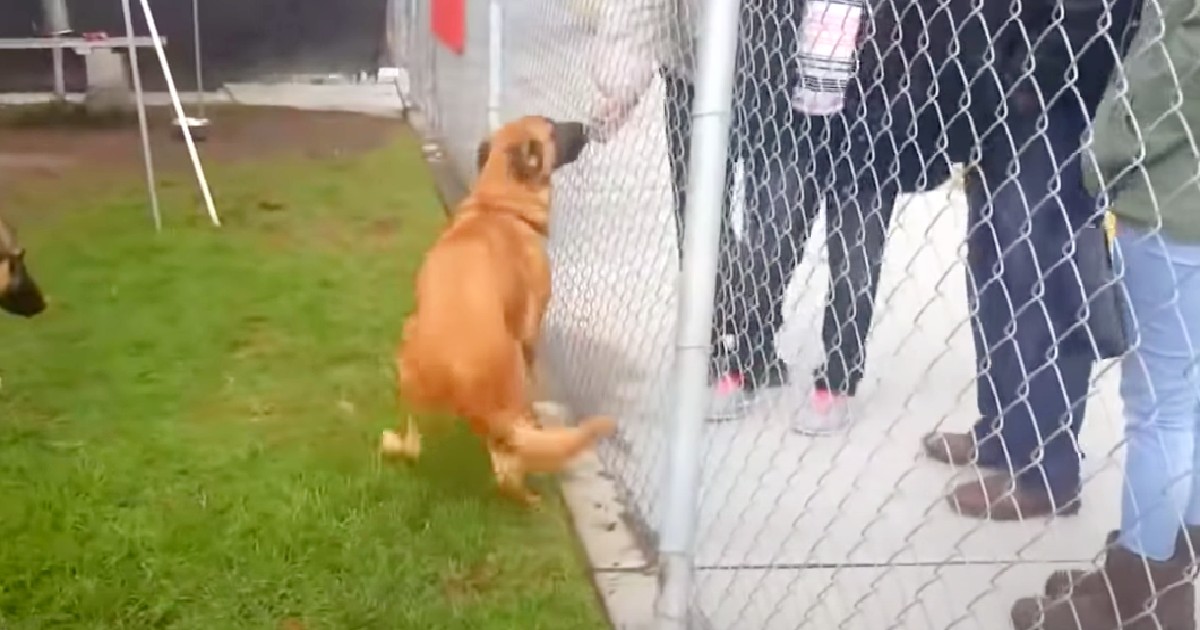 Zuzu is a 2-year-old German Shepherd, she used to live with her biological father together with their adoptive family, unfortunately, when she lost her father she became very depressed and sad all the time. she even tried to run away her home by jumping the fences and landing on a neighbor’s yard.

unluckily, the neighbor didn’t understand the dog’s situation, they were very angry and they called the animal control which took Zuzu to the Downey Animal Care Center in California. People there thought that Zuzu was a stray and she was treated her like one. center staff tried there best to approach her, but Zuzu was too nervous and kept her distance.

“She is a friendly girl but I sensed sadness and confusion,” Desi Lara, a volunteer at the shelter told The Dodo. “Most dogs zoom around the yard. She treaded softly, nervous to look around.”

However, when one day, some people arrived at the shelter to adopt a dog. When Zuzu saw them, she immediately went crazy with excitement. She was doing what all dogs did when they see their family, she was wagging her tail, her face brightened up, and she looked like a completely different dog. it was clear that Zuzu knew them.

It was obvious that the family too knew Zuzu already. they started petting her with their hands through the fence. People there thought they were watching a heartwarming moment of pet-family reunion, and that at the end of the day the family and Zuzu would go home together.

But that was not the case.

“All of a sudden she was all excited, doing a little zoom,” Lara says. “A joyous personality came out when she saw her people.” But the family told them they were looking for another dog.”

“They didn’t want her back because she kept escaping,” Chapin, a trainer at Shelter Me, tells The Dodo.

Normally Zuzu needs some time to heal after her father’s passing, but it seems that the family couldn’t deal with her depression and bad mood, so they choose to adopt a new dog to replace her. However, it has not been clear whether they ended up getting another dog after that visit or not.

After hearing Zuzu’s story, a rescue organization came to take Zuzu. they were sure they would soon find a loving forever home for her that wouldn’t see her as disposable. Some people have to put in mind that similar to humans, animals need time to overcome the pain after the loss of a loved one-be it an animal or a human. they may feel depression, sadness, nervousness, but if they are given time and care, they are most likely to recover and be happy and lively again.

We are shocked that a family would deny their once family dog and let it go just like that because of a phase it’s going through. On the other hand, we are glad Zuzu was taken care of by the staff of the shelter and rescue, and we’re sure she has already found a new family!

Please SHARE her story with your friends and family.